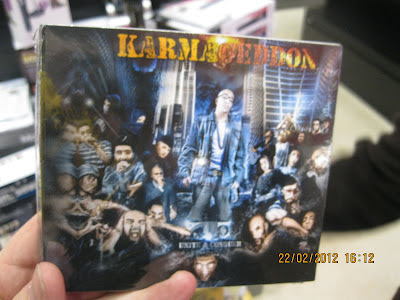 The Arabic Hip Hop movement is one that should be respected & supported. I have been supporting it since I started this blog back in '09 & it was a real blessing to meet the young & talented artists that are using Hip Hop in a way to express what's going on in their minds. People think Hip Hop is only associated with negative/dirty words/ gangs because this is what the Mass Media is projecting about this art form plus we as Arabs are known for our "Love" tracks that are everywhere - well guess what, Love is not the only thing going on between the youth in Arabia - You got Social, Political , Community issues that are going on and the artists are using "Rap" or "Lyrics with great beats" to express those issues to their communities & the world.
DJ Lethal Skillz whom I had the honor of meeting & interviewing for both my blog & my FM radio show just released his 2nd Highly anticipated album "Karmageddon" . Skillz is based in Lebanon & have been working very hard & actually sacrificed a lot for this movement.. He is one of the founders of the Arabic Hip Hop movement & deserves every single success bite he gets.
I just wanted to review this album, so here it goes:
The album starts with a Beatbox by "Johnny Madness" with a segment called "KarmaGeddon" - we move on to "Beirut City" handled by Hanouneh,El Edd, MC Moe - a track that discusses Beirut Life Style & the city's energy.. Love Hanouneh's part on this one - I also love the ending with a great Trumpet! - We witness a great track next - for sure "MY PERSONAL FAVORITE" the track is "The Messenger" by "Omar Offendum" - the Catchy Hook - the verses - the lyrics - the production. Everything about this track is just perfect - You will love the 2nd verse - & you will love this track - "Dont Hate Me - I am just the Messenger" . DJ Lethal Skillz shows us some of his Artistic Scratches here.
Ram6 goes on to track #4 with "Unity" - Arabic Hip Hop is strongly present in this album. #5 is Operation Lost Art by the Arabian Knightz (Egypt) - #6 is Shadia Mansour showing a different style of her's with "Language Of Peace" since she raps hard on this one in Arabic - The Lady Of Arabic Hip Hop is always up to the challenge - the lyrical revolution of this track is admirable. #7 Artist Vandal represents Real Hip Hop with his flow along with the great beats from the Skillz with "Industry Rulz".
#8 "Lookin Out" Performed by Ghost, Deen, Stormtrap, Rush, BellyWize - Deen goes real truth & Hard as always along Stormtrap rapping his politically charged lyrics raising Arabic Hip Hop to a great level.
#9 "My Nation" by Boikutt - The Hook starts "If we only can Live with our Unity/Love" a Political charged track that is also performed in Arabic asking us Arabs Youth "Where is your youth, where is your knowledge?" - Lyrically a great track - a must listened to more than 3 times to get hooked to it !! - Skillz
#10 "Fight The War" by The Narcicyst - My 2nd fav in terms of the beat & the amazing Narcy flow on this track - especially in the 2nd Verse where he goes hard in Arabic!
#11 MC Amin goes with "Click Clack" followed by #12 "Resistant Cultures" performed by El Edd, Zeinedin, Ram6 - a track that has a Jazzy feeling & its a good to just cruise with this track & get some real Beirut Stories from 3 Lebanese MC's.
#13 Saudi is represented by "Don Legend" with his track "My Definition Of Living" - #14 "Big A" is also present here (although he has retired from the music scene - but this also shows you how loyal Skillz is since he never forgets any member of the 961 movement" I can see this track played big in a club. #15 W.M.D goes hard with "The Guardians" - #16 Ram6 's "Civil Disobedience" - Skillz uses Arabic Samples at the beginning with the usual Ram6 going political in his verses - discussing the minds of the people in the Arab World - Raps in Arabic & has some great verses! Production is off the hook!
The Album finishes with "Thoughts from the Lost River" performed by "El Far3i" straight from Jordan - A talented MC/Performer
Overall , the album is great to listen to and you will definitly get a feeling of the mind elevation Arab Hip Hop Artists are trying to seek through their lyrics. This isnt a POP album & this album isnot only about Love - it discusses matters that are important to the youth & in my opinion should be supported.
Get in the movement & support this album now! BUY THE ALBUM NOW HERE . The Album is available in Virgin Megastore (Lebanon) & soon will be throughout the Middle East inshalla.
I also would like to thank FORWARD MUSIC (Lebanon) for their support in giving a platform for underground artists. Salute!
Posted by BIG HASS at 11:51 PM No comments:

This is historic in every single way. The Fam DJ Lethal Skillz released his 2nd anticipated album "Karmgeddon" that featured a lot of artists from Lebanon & the Arab World. The album is officially available at Virgin Megastore (Lebanon) & soon across the Middle East, which is historic because Skillz produces beats for Arab Hip Hop Artists to rap on & the fact that it is available at a Major Music store is history.
Re-Volt Will definitely review the album & write about it soon but for now - you can purchase your copy via this link (http://www.forwardmusic.net/music/karmageddon)
For now - enjoy this official release footage just released..
The event took place at this cool new joint in Beirut City Called "DRM" Democratic Republic Of Music - also salute for them for hosting this event & hopefully well collabo soon!
Arabic Hip Hop always making moves..Glad to support & saluting Skillz & all the artists involved in the movement.

A Great interview with one of my favorite artists & humans!
Brother Ali Discusses Islam, Life & Hip Hop!
A Must Check.
Posted by BIG HASS at 2:58 PM No comments:

I was honored to Debut this song on my show in Saudi Arabia when it first came out about a month ago.
Buy the track now & feed 2 people for a day. #LiveFeedAfrica.org
This is the video just released.
Please support the music that is for a cause.