Mochilla Presents: Sounds Of Al-Mashriq "The Land Where The Sun Rises" 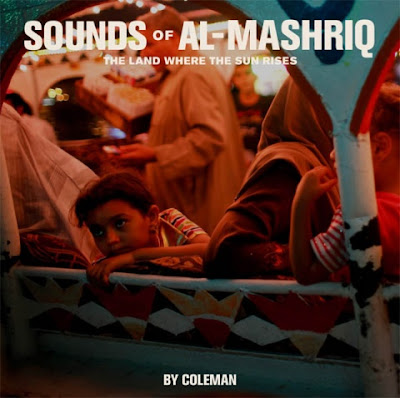 When you put Mochilla (E.Coleman &B+) & Immortal Entertainment (Laith Majali & Naser Kaalaji) together you are getting a legendary mix there. They are definitely people to watch out for..!
Check this amazing tribute from Mochilla on their visit to the Middle East for the past year. this is what they collected!
& as B+ said:
Enjoy, open your ears and let the beauty and depth of the cradle of civilization wash away your preconceptions… -B+
Thats the link to the Tribute Mix done by E.Coleman: Check it out now! (download it)
http://music.vtechphones.com/2010/09/mochilla-brings-you-an-exclusive-music-mix-from-the-east/comment-page-1/#comment-5607
*Photo by the talented Laith Majali
Posted by BIG HASS at 4:05 AM No comments: 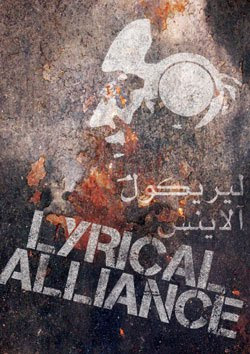 
Hosted by UK hip hop lynchpin DJ MK (KISS FM, Roots Manuva, Dizzee Rascal), Lyrical Alliance is a ground-breaking, international urban music event that transcends language and cultural barriers to celebrate the common pillars of hip hop all over the world: the beat and the word.
The artists will be developing new work together in a series of live sessions and workshops throughout the year that will reach a climax with a series of major concerts in Europe in Autumn 2010. The nights take the classical Arabic Mu'Allaqat poems as a starting point and builds on these to bring an event which will link into hip hop’s metrical and rhythmic roots as never before.
Topping the bill will be major US star Talib Kweli. Ever since emerging alongside Mos Def as a member of Black Star in the late 90s, Talib Kweli is one of the few artists making commercially viable music that matters – hard hitting and able simultaneously to educate and entertain, his socially conscious brand of rap counts Jay-Z and 50 Cent amongst its biggest fans. Kweli released his highly anticipated second Reflection Eternal LP “Revolutions Per Minute” via Blacksmith Music/WBR in May this year and is touring the US with his partner Hi Tek.
Talib Kweli will be joined by members of the Lyrical Alliance posse for a momentous finale to this righteous and inspirational hip hop collaboration.
Date: Sat 16th October 2010
Roundhouse, Chalk Farm Road, London NW1 8EH
Doors: 7pm
Tickets: £22.50 in advance
Booking 08444 828008 www.roundhouse.org.uk
Part of Dash Arts Arabic series
New music, theatre and contemporary dance
For more info on the Arabic Series visit www.dasharts.org.uk
Series launched: May 18th 2010 with Babel (words) at Sadler’s Wells
Posted by BIG HASS at 3:48 AM No comments:

"Beirut Hip Hop" presented by RE-VOLT was held at THE BASEMENT on Wednesday, July 21st 2010.

The Line up was

Here are some videos of that night. Thank you to whoever turned out to this event & much respect to these artists..Support real music. That's all what Re-Volt is about. 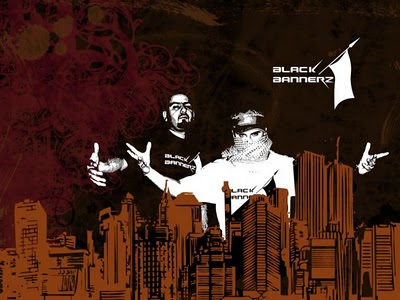 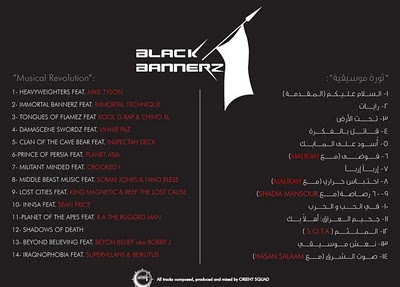 Based in Saudi Arabia but originally from Syria.. Black Bannerz are about to make some real big noise in the Arab region & internationally as well..
"Music Revolution" is the name of their debut Double Album that they are working on at the moment..its revolutionary in its beats, its language & the messages behind it. As described by them, just the use of the "Original Arabic Tongue" (Fusha Language) is a revolution of its own.
It's a double album, an Arabic & English sides with guests like Shadia Mansour, Malikah, Hasan Salaam on the Arabic Side & get
this...
Immortal Technique, Vinnie Paz, Sean Price, R.A The Rugged Man, Chino XL, Crooked I, Reef The Lost Cauze, Nino Bless, Planet Asia, Scram Jones,Beyond Belief, Kool G Rap,King Magnetic (yes go ahead & say "damm")
These are names that will be featured in the album, with tracks especially made for Black Bannerz! These are heavyweights people ! Its heavyweight in a way that they got Mike Tyson featured up on a track !! :)
All tracks are produced by Orient Squad.
There is no specific date for the release of the album; but it could be soon..so stay tuned.
I caught up with S.O.T.A & Holywar from Black Bannerz for an amazing Interview on Re-Volt Radio to discuss this album among other things!.
You can check the full audio interview below.
THE FULL AUDIO INTERVIEW (just click play) 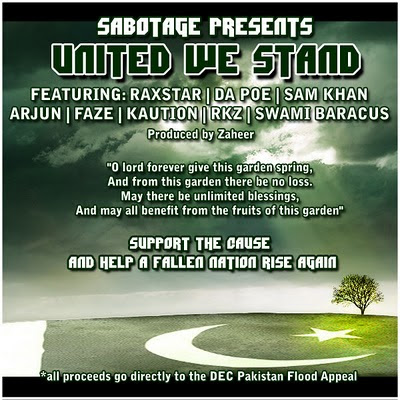 When I first saw the video & heard the "United We Stand" track that was performed by a group of artists based in the UK and basically it was to support the flood that occurred in Pakistan recently.. I had to interview that man behind it and he was only 19 years old & goes by the name of "Sabotage". He was born in London but comes from Pakistani/Kashmiri descent & hes also an undergraduate Law student !
I had a very interesting discussion with Sabotage regarding this amazing single that you can buy of Itunes, his young filled hip hop career, his thoughts on being labeled the next "Lowkey" + we got an exclusive live freestyle performance..
Sabotage is definitely a talented fella & needs support. Dont sleep on him.
THE FULL AUDIO INTERVIEW (Click play below) Ladies & Gentlemen, I introduce to you Arabian Knightz, based out of Egypt this Hip-Hop group has been making some noise & will blow up after the release of their highly anticipated Album "Uknighted State of Arabia" that will be released real soon & contains collaborations with lots of Arabs & International artists. The tracks are being mixed by the legendary Fredwreck.
I caught up with A-Rush whose one of the 3 member group that has also "Sphinx & E-Money" & had a discussion about the album, how they started and an Arab Hip-Hop show & their Record Label (Arab League Records)
Appreciate the time bro!
You can check out Arabian Knights on Facebook, also on Myspace:
http://www.myspace.com/arabianknightz
Support Arabic Hip-Hop! Egypt Stand up...
THE FULL AUDIO INTERVIEW (Just Click Play)

Give Thanks..thats the theme of the track "Hamdulillah". A track by The Narcicyst feat Shadia Mansour.
The video was directed & edited by the talented Ridwan Adhami.
Take a look at this video & forward it around.
It was an honor being part of this!
Posted by BIG HASS at 2:39 PM 1 comment:

Lowkey's New Music Video just released last night (11th Sept,2010) & its already 22,500+.
Something to think about. Check it out now. Focus on those lyrics!
Hip Hop is a blessing & a culture. Lots of things happening and I am proud to be supporting this movement.
This guy is speaking and If I were you...I would listen carefully to this!
Posted by BIG HASS at 1:52 AM No comments:

MY INTERVIEW ON RADIO LEBANON FM ON "THE TRIP" 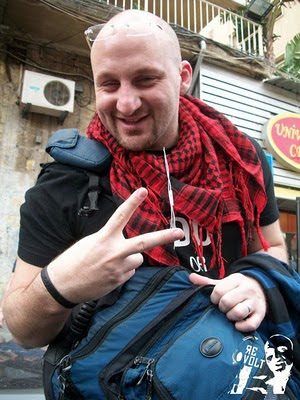 During my last visit to Beirut,Lebanon (July,2010) I was generously hosted on RADIO LEBANON FM on a show called "The Trip" with Freddy. I was on for 1 hour talking about Re-volt Radio,Commercialism of songs & the Beirut Hip Hop Show I organized on 21st July,2010.
I would like to thank Freddy & the station for allowing me speak my mind and you can find the full audio interview below. Just click play & listen up. Would be great if you can leave me your comments :) Everything was LIVE and not planned! ( I had a great time!)
You will get what I am about through this interview! 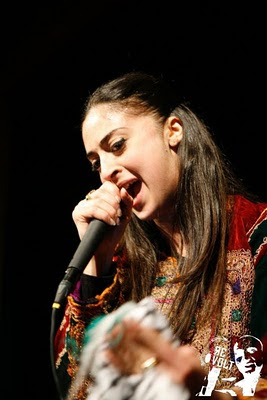 Ms. Mansour was told to return to her luggage after a usual baggage xray and multiple searches, when eight agents ran towards her, weapons drawn and pointed, they aggressively kicked away her bags and surrounded her.

The eight agents had their guns pointed at Ms. Mansour while having her stand in the same position for one hour in suspicion of a bomb being planted in her microphone which they had in their possession for ten minutes already.

Ms. Mansour assured the agents the microphone was used for recording music and was then asked by an officer to sing her lyrics to him, they screamed at her and asked “who she worked for, who bought the microphone, what does she sing about” and as the agents and officers shouted over one another she was also told, “we have found something planted in the microphone” all this transpiring while airport goers observed the entire ordeal.

Although standard for Palestinians to be strip searched upon departure of Israel, Ms Mansour was made to lay down on her back as female agents pushed aggressively into her joints and neck.

Once the female agents finished searching her the microphone was returned and Ms. Mansour was directed to her flight en route to London as though nothing had happened.

Ms. Mansour told us “For a few minutes I really thought they were going to take my life, the way they handled the situation literally made me feel like I was an attempted suicide bomber that had just been captured or something”.

No legal action has yet been taken.

Please show support by posting this!

I saw this artist perform LIVE & let me tell you she is fierce on that mic! 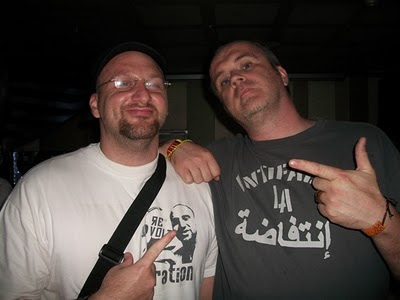 My talented creative friends Laith Majali & Nasser Kalaji from Immortal Entertainment have been making some noise for quite some time now in the Arab World in terms of setting up good shows with great artists!
On the 29th July,2010; they organized a show "Once upon a Sound" in Amman, Jordan that featured
B+ & E. Coleman (Mochilla)
Quantic, Omar Offendum & Amman's own DJ Sotusora. I actually decided to fly from Jeddah to Amman last minute for a day to catch this & it was worth it.
I got introduced to new music, new vibe, new artists & got to see Offendum rock the stage (check out a quick video of Omar performing). Music was brilliant with soul, vinyls from Brazil,LA, Ethiopia, Beirut, Cairo.Records that travels from Jazz to Salsa to hip hop, funk & soul. The whole night was epic and Immortal Entertainment gave us a surprise by having Jay Electronica who rapped & took the stage. This was an epic night in every single way.
After the show, I caught up with B+ who was really generous enough to provide me with copies from the TIMELESS project that Mochilla did in honor of J. Dilla (R.I.P).
This is the FULL AUDIO INTERVIEW (in the heart of Amman,Jordan) "just click play" Ladies & Gents, I introduce to you ETERNIA , a unique & talented Canadian female Hip Hop Artist. She is a massive lyricist and a has great power & control on the mic.
It was a great pleasure having her on RE-VOLT Radio for a great interview that I personally enjoyed! Make sure you you listen to it, we discussed her views on female hip hop world & FM radio in addition to her upcoming projects.
Make sure you buy her album "AT LAST" produced by MoSS. Also you can check her video feat Termanology & Reef the Lost Cauze right here & you will see what I am talking about.
A Shout out to DJ Sav-One for setting this up.
THE FULL AUDIO INTERVIEW with Eternia (just click play) 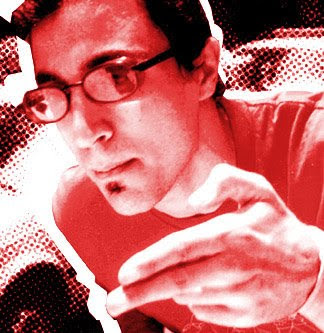 At a time when all rappers in the Middle-East were putting out records in English and French, Wael a.k.a. RAYESS BEK (Lebanese/Palestinian) decided to flip the script and rap in Arabic.
Rayess Bek is the founder of Rap and Hip Hop in Arabic. He adapted Rap music to his background and created his own sound and style. His lyrics - always polished, sharp and committed - speak about Lebanon, its crisis, its war, its youth and disillusionment with politics by the new generation.
I had the chance to call up Wael & discuss few thing on a RE-VOLT Interview from his beginnings with his amazing collaboration with Wu-Tang member RZA! along his passion for mixing Arabic Instruments such The Oud into Hip Hop.
Make sure you support this talented fella by checking out his website & buying his tracks:
Official Website: http://www.rayessbek.com/
THE FULL AUDIO INTERVIEW (just click play)